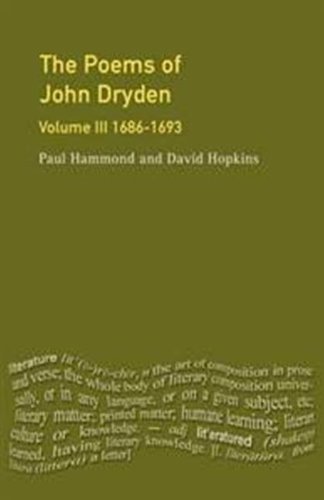 Product Description
John Dryden was the greatest writer of Restoration England. These volumes are the third and fourth volumes in a five-volume edition of Dryden’s poems and result from a complete reappraisal of the canon, text and context of his work. The modernised text has been prepared from a fresh examination of the early printed editions and takes account of the large number of manuscript copies which survived. These volumes cover the poems which Dryden published between 1686-1696. This was a decade which saw the completion of his work of Catholic apologetics, The Hind and the Panther, the major translations from Juvenal and Persius, and his return to the stage after the Revolution of 1688-9 deprived him of the laureateship. Throughout these two new volumes Dryden’s language is glossed in unprecedented detail, revealing the poetic precision of his vocabulary. Together with volumes one and two they offer the most informative and accessible edition of Dryden’s poetry and provide an invaluable resource for students of Restoratation culture.