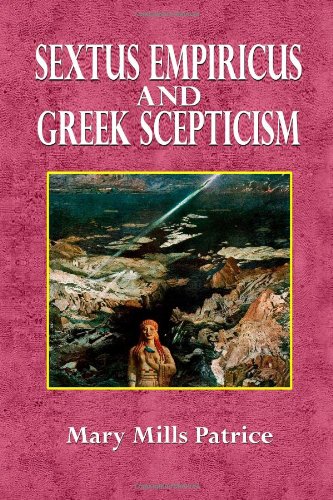 Product Description
An excerpt from The Literary World: A Monthly Review of Current Literature: A thesis successfully offered by Mary Mills Patrick, for a degree at the University of Bern, is here printed, as supplying what had before been lacking in English, a convenient statement of the tenets of Pyrrhonism. The technical term epoché, used to mean suspension of judgment, appears to be very prominent in this system, and prized as a means to the desirable end called alaraxia, tranquillity. Pyrrho, from whom the school of thought was often called Pyrrhonism, was an ascetic moralist in the suite of Alexander the Great in India, later living at Elis. Sextus Empiricus is believed to have been a physician, in about the last part of the second century of our era, and a Greek, though probably resident at Rome, who wrote in advocacy of skeptical views of phenomena. A translation of the first book of his work, Pyrrhonic Sketches, is annexed to the essay. This contains the ten tropes which form a most important part of this philosophy, and which seem to be arguments full of illustrations, and leading to the great skeptical doctrine of suspense of judgment, practically about what Prof. Huxley has named agnosticism. Five more tropes are added by Sextus, as of later origin than the ten. A résumé of all these, and a criticism of Pyrrhonism, are given in the body of the thesis. Painstaking study is indicated by the great number of citations of many other writers. The style of argument of Sextus Empiricus is that curious compound of mental ingenuity and crudeness of scientific knowledge characteristic of his nation and time.

“Miss Patrick has discussed the position of Sextus Empiricus as a philosopher, with great critical insight. The volume is full of curious learning.” —Westminster Review.

“A very excellent philosophical monograph. Would that all home degrees in philosophy were given for as good and deserving work.” —Glasgow Herald.

“A short, scholarly monograph…. It deals with the subject critically and historically, and includes a clearly written account of Pyrrho, the patriarch of the sceptic school.” —Literature.

“The inquirer into Pyrrhonism and the development of Greek scepticism will be grateful for this study.” –St. James Gazette.