Notes on the Book of Deuteronomy, Volume I 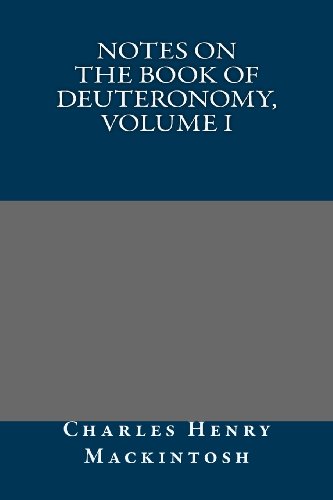 Product Description
The character of the book on which we now enter is quite as distinct as that of any of the four preceding sections of the Pentateuch. Were we to judge from the title of the book, we might suppose that it is a mere repetition of what we find in previous books. This would be a very grave mistake. There is no such thing as mere repetition in the Word of God. Indeed, God never repeats Himself, either in His Word or in His works. Wherever we trace our God, whether on the page of holy Scripture or in the vast fields of creation, we see divine fullness, infinite variety, marked design; and just in proportion to our spirituality of mind will be our ability to discern and appreciate these things. Here, as in all beside, we need the eye anointed with heavenly eye-salve. What a poor idea must the man entertain of inspiration who could imagine for a moment that the fifth book of Moses is a barren repetition of what is to be found in Exodus, Leviticus, and Numbers! Why, even in human composition we should not expect to find such a flagrant imperfection, much less in the perfect revelation which God has so graciously given us in His holy Word. The fact is, there is not, from cover to cover of the inspired volume, a single superfluous sentence, not one redundant clause, not one statement without its own distinct meaning—its own direct application. If we do not see this, we have yet to learn the depth, force, and meaning of the words, “All scripture is given by inspiration of God.”