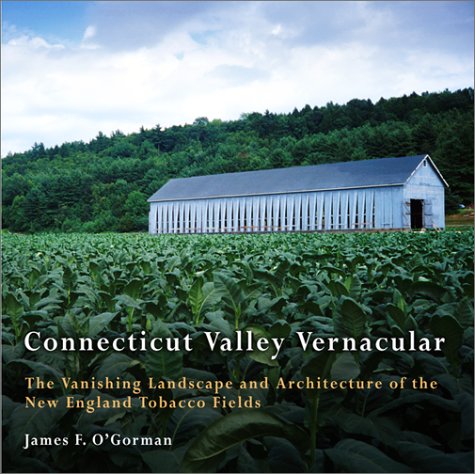 “Little by little the gap grows larger and larger between people and their roots. Western life now plays out far from its origins in nature and history. Think of this essay as a pause in that on-rushing existence.”—From the Introduction

A traveler along the banks of the Connecticut River will be struck by the number of long low sheds rising from the fields as if they are an extension of the landscape. A building type shaped by necessity that grows more beautiful with use and age, these are tobacco curing sheds, mute witnesses to a slowly vanishing agricultural tradition and a thriving economic boom of the last hundred and fifty years.

Surprisingly, the Connecticut River valley was once a major producer of cigar leaf tobacco. One of the plants whose cultivation was learned from the native Americans, tobacco was the main crop of many old Yankee farmers and, after them, the Slavic newcomers. The need to season the “Indian weede” gave rise to the structure of the drying barns, a vernacular style unique to its time and place. Just as a picture can throw light on an entire world, so can these drying sheds open a window on a way of life that is fast receding.

James F. O’Gorman reads through oral histories, newspaper reports, and the terse factual writing of agricultural diaries to bring to life the risks and rewards of living close to the seasons, at the mercy of rainfall and sunshine. He has collected an array of vintage and newly commissioned photos of the work of growing tobacco, from de facto portraits of anonymous laborers to images of the sheds themselves, with all their ventilating doors open, welcoming the air. In this beautifully crafted book, O’Gorman treats both the people and the sheds with the respect and admiration their precarious presence requires.

An inquiry that becomes an elegy for a way of life that is part of our rural heritage, Connecticut Valley Vernacular is an appreciative glance back by one of our premier architectural historians.