The Works of Francis Maitland Balfour (Illustrated – Volume II (of 4): VOL. II. – A TREATISE ON COMPARATIVE EMBRYOLOGY. Vol. I. Invertebrata. 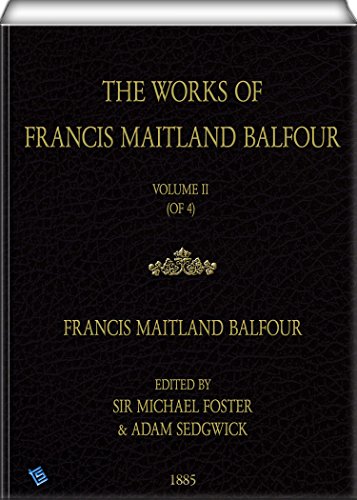 My aim in writing this work has been to give such an account of the development of animal forms as may prove useful both to students and to those engaged in embryological research. The present volume, save in the introductory chapters, is limited to a description of the development of the Invertebrata: the second and concluding volume will deal with the Vertebrata, and with the special histories of the several organs.

Since the work is, I believe, with the exception of a small but useful volume by Packard, the first attempt to deal in a complete manner with the whole science of Embryology in its recent aspects, and since a large portion of the matter contained in it is not to be found in the ordinary text books, it appeared desirable to give unusually ample references to original sources. I have accordingly placed at the end of each chapter, or in some cases of each section of a chapter, a list of the more important papers referring to the subject dealt with. The papers in each list are numbered continuously, and are referred to in the text by their numbers. These lists are reprinted as an appendix at the end of each volume. It will of course be understood that they do not profess to form a complete bibliography of the subject.

In order to facilitate the use of the work by students I have employed two types. The more general parts of the work are printed in large type; while a smaller type is used for much of the theoretical matter, for the details of various special modes of development, for the histories of the less important forms, and for controversial matter generally. The student, especially when commencing his studies in Embryology, may advantageously confine his attention to the matter in the larger type; it is of course assumed that he already possesses a competent knowledge of Comparative Anatomy.

Since the theory of evolution became accepted as an established doctrine, the important bearings of Embryology on all morphological views have been universally recognised: but the very vigour with which this department of science has been pursued during the last few years has led to the appearance of a large number of incomplete and contradictory observations and theories; and to arrange these into anything like an orderly and systematic exposition has been no easy task. Many Embryologists will indeed probably hold that any attempt to do so at the present time is premature, and therefore doomed to failure. I must leave it to others to decide how far my effort has been justified. That what I have written contains errors and shortcomings is I fear only too certain, but I trust that those who are most capable of detecting them will also be most charitable in excusing them.

The work is fully illustrated, and most of the figures have been especially engraved from original memoirs or from my own papers or drawings by Mr Collings, who has spared no pains to render the woodcuts as clear and intelligible as possible. I trust my readers will not be disappointed with the results. The sources from which the woodcuts are taken have been in all cases acknowledged, and in the cases where no source is given the illustrations are my own.

I take this opportunity of acknowledging my great obligations to Professors Agassiz, Huxley, Gegenbaur, Lankester, Turner, Kölliker, and Claus, to Sir John Lubbock, Mr Moseley, and Mr P. H. Carpenter, for the use of electrotypes of woodcuts from their works.

I am also under great obligations to numerous friends who have helped me in various ways in the course of my labour. Professor Kleinenberg, of Messina, has read through the whole of the proofs, and has made numerous valuable criticisms. My friend and former pupil, Mr Adam Sedgwick, has been of the greatest assistance to me in correcting the proofs. I have had the benefit of many useful suggestions by Professor Lankester especially in the chapter on t