The First Philosophers: The Presocratics and Sophists (Oxford World’s Classics) 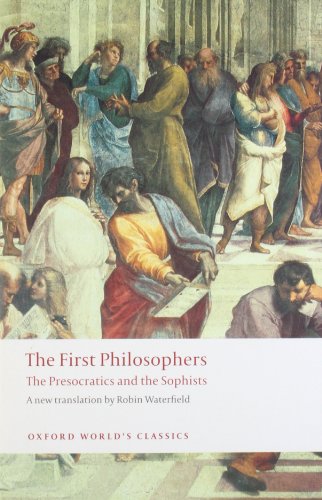 Product Description
Aristotle said that philosophy begins with wonder, and the first Western philosophers developed theories of the world which express simultaneously their sense of wonder and their intuition that the world should be comprehensible. But their enterprise was by no means limited to this proto-scientific task. Through, for instance, Heraclitus’ enigmatic sayings, the poetry of Parmenides and Empedocles, and Zeno’s paradoxes, the Western world was introduced to metaphysics, rationalist theology, ethics, and logic, by thinkers who often seem to be mystics or shamans as much as philosophers or scientists in the modern mould. And out of the Sophists’ reflections on human beings and their place in the world arose and interest in language, and in political, moral, and social philosophy.
This volume contains a translation of all the most important fragments of the Presocratics and Sophists, and of the most informative testimonia from ancient sources, supplemented by lucid commentary.

About the Series: For over 100 years Oxford World’s Classics has made available the broadest spectrum of literature from around the globe. Each affordable volume reflects Oxford’s commitment to scholarship, providing the most accurate text plus a wealth of other valuable features, including expert introductions by leading authorities, voluminous notes to clarify the text, up-to-date bibliographies for further study, and much more.