The Cavaliers of Virginia, or the Recluse of Jamestown: An Historical Romance of the Old Dominion, Vol. 1 of 2 (Classic Reprint) 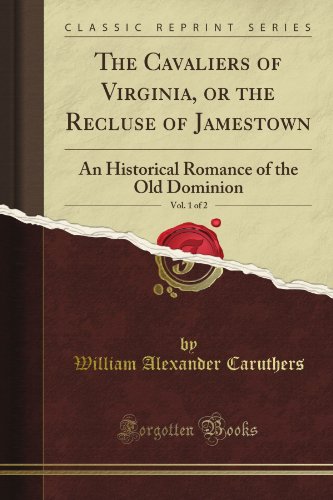 Product Description
Virginia. The mind of the reader at once reverts to the names of Raleigh, Smith, and Pocahontas. The travellers memory pictures in a moment the ivy-mantled ruin of old Jamestown. A bout the year 16 ,the city of Jamestown, then the capital of Virginia, was by no means an unapt representation of the British metropolis; both being torn by contending factions, and alternately subjected to the sway of the Roundheads and Royalists. First came the Cavaliers who fled hither after the decapitation of their royal master and the dispersion of his army, many of whom became permanent settlers in the town or colony, and ever after wards influenced the character of the state.
(Typographical errors above are due to OCR software and don’t occur in the book.)

Forgotten Books is a publisher of historical writings, such as: Philosophy, Classics, Science, Religion, History, Folklore and Mythology.

Forgotten Books’ Classic Reprint Series utilizes the latest technology to regenerate facsimiles of historically important writings. Careful attention has been made to accurately preserve the original format of each page whilst digitally enhancing the aged text. Read books online for free at www.forgottenbooks.org