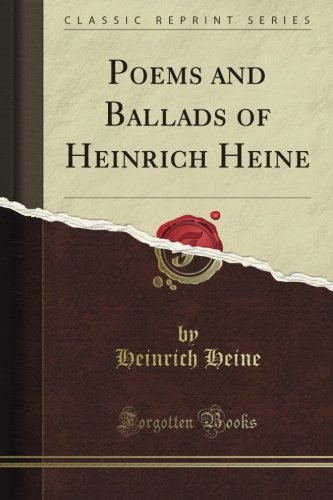 Product Description
Harry Heine, as he was originally named, was born in Dusseldorf on the Rhine, December 13th, 1799. His father was a well-to-do Jewish merchant ;and his mother, the daughter of the famous physician and Aulic Counlor Von Gelderu, was, according to her son, a femme distingue. His early childhood fell in the days of the occupation of Dusseldorf by the French revolutionary troops ;and, in the opinion of his biographer Strodtmann, the influence of the French rule, thus brought directly to bear upon the formation of his character, can scarcely be exaggerated.
(Typographical errors above are due to OCR software and don’t occur in the book.)

Forgotten Books is a publisher of historical writings, such as: Philosophy, Classics, Science, Religion, History, Folklore and Mythology.

Forgotten Books’ Classic Reprint Series utilizes the latest technology to regenerate facsimiles of historically important writings. Careful attention has been made to accurately preserve the original format of each page whilst digitally enhancing the aged text. Read books online for free at www.forgottenbooks.org